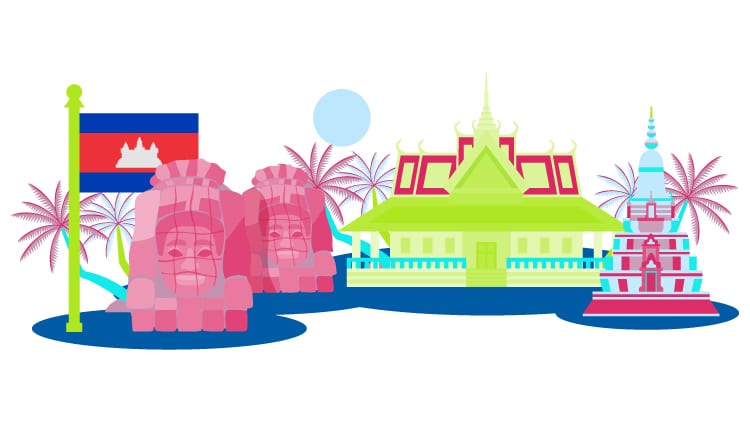 How To Translate English To Khmer

There are so many interesting things in our world that it is impossible to learn about all of them in one lifetime. But what we can gather from that is our world is fascinating and has so much to offer. We don’t have to try to learn about all of it, but we can focus on a couple of good things. The uniqueness of various cultures teaches us that there is beauty in our differences. We don’t have to hate each other simply because of our differences. In fact, if we try to be more open, it will become easier to develop an understanding of the world.

Many people will have trouble locating Cambodia on the map, simply because the country is rarely in the news. There is always news coming out of Asia, but it is often about countries like India, China, Japan, and Saudi Arabia. As a result, the rest of the countries of the continent often gets ignored. But this Southeast Asian country, which shares its borders with Thailand and Vietnam, is not any less important than other states in the region. It has a population of 15 million and an elective constitutional monarchy.

Indian influence brought Hinduism and Buddhism to the country. Even today, the majority of the population practices Buddhism. The official language of the country is Khmer, which has been influenced by Sanskrit and Pali through Hinduism and Buddhism. The Austroasiatic language Khmer is spoken by 16 million natively. The majority of its speakers can be found in Cambodia. Other countries where it is a native language are Thailand and Vietnam. Khmer is not a tonal language, which makes it different from other vernaculars of the region like Burmese, Thai, and Vietnamese. The final syllable in words is often stressed. It is written in Khmer script. The uniqueness of the script makes it harder for people to read it. Currently, only 79% of the Cambodians can read written Khmer properly.

Living on your own is cool, but you can’t succeed in life without interacting with others. You will have to get in touch with people eventually if you wish to live a healthy life. Humans cannot survive without social interaction. But there are a lot of things that come in their way when they wish to communicate with others. Distance is the biggest problem, but fortunately, technology has taken care of that. The second biggest issue is the linguistic differences between people. The solution to that is in translation.

The seven billion people of the earth that speak more than seven thousand languages do not have to live in their own communities without ever communicating with each other. They can get over linguistic barriers. However, people can’t do this on their own and require the assistance of linguistic experts. Those who have plenty of experience in the field can help others with all of their linguistic problems. There are also plenty of apps these days that offer assistance with simple linguistic problems.

How to Translate English to Khmer:

If you plan on expanding your business to Cambodia, you will need to get all of your marketing content translated into Khmer. There are big businesses that have not even changed their taglines but also their names in different countries. There are cultural aspects of languages that can only be understood by native speakers. When businesses wish to attract an audience, they not only have to focus on the language but also on the culture. People also require English to Khmer translation when they apply for immigration to Cambodia. Whatever the reason may be, it makes people wonder how they can translate English to Khmer.

If you require assistance with official documents or advertising content, you should get in touch with qualified experts. You can’t handle such tasks on your own if you don’t have the necessary qualification and experience. Those who have experience in the field will know how to translate your documents accurately. It is better that you hire native translators because they will be able to provide you with culturally accurate translations. Whether you need a certified translation for immigration or require linguistic assistance to connect with a foreign audience, only qualified experts can help you.

If you need English to Khmer translations for everyday conversations, then you can use one of the reliable language apps. For those traveling to Cambodia, Google Translate will be an amazing assistant. It will not only provide them written translations but also work on images. Users can also enable the sound feature of the app to communicate with others without having to look down on their phones again and again. Yandex Translate is another app and website that offers linguistic assistance to travelers. You can copy the translations from the app and paste them in messages when you are texting with someone.

Remember to only go to qualified experts when you are facing a complicated linguistic problem. Online tools are only useful for casual conversations; they won’t be able to assist you during the immigration process. Since Khmer has so many different dialects, it further reduces the efficiency of online tools and language apps. But if you hire a native expert, they will be able to understand the differences between different dialects and provide you with the right solution accordingly. So, make the right call and always hire experts whenever you require accurate translations.

Questions and quotes are free. Live chat with us 24/7
How To Translate English To Khmer was last modified: July 28th, 2020 by admin